My diary for June 1967 relates how, at the opening of A Day in the Death of Joe Egg at Citizens Theatre, my wife and I sat in the circle before it started while a woman behind us was going through the programme for her friend who’d forgotten her glasses. ‘This one’s named here and his picture, but he’s not in the play. That’s funny. Ah, here it is. He’s the writer. Yes, he wrote it. He has four children and two cats. Bless his heart. And married to an art teacher,’

She went on telling of her plans for the summer. ‘We thought of Spain but ..’  at which point the lights went down. An hour later, after the wonderful cast had given what is still the best performance of my first real stage play, the woman continued: ‘But in the end we decided on Cyprus.’ But my wife says I made this up, like most of the play itself. 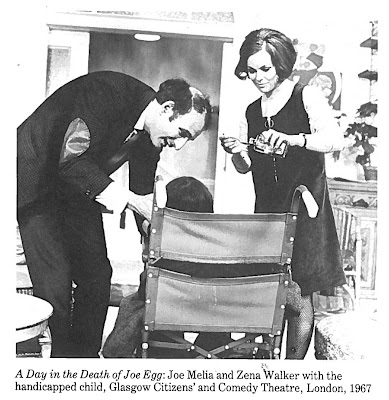 Plays, especially comedies, strike people in very different ways. William Goldman in his book ‘The Season’ describes seeing it on Broadway. ‘ I’ve been waiting a long time for Joe Egg to come along and do its demonstration so that I could sit back and say to myself . ‘Oh, sure, that’s it, what it’s all been for: it’s the theatre’s special ‘thing’ and no other art form can steal it away. It is, in the true and non-phony sense of the word, ‘theatrical’ and that’s why nobody can ever tell you about ’Joe Egg’. You gotta be there.’ 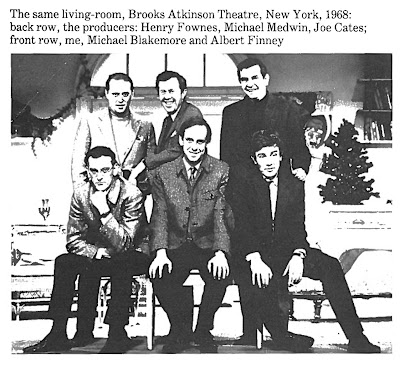 Somewhere between this and the lady at Citizens is perhaps the truth. We’d cautiously expected three weeks there but somehow all felt we’d done something special. Next day my wife and I flew home to Bristol and our three other children, leaving this new-born one to make its own way in the world, which it has for 44 years. Diary goes on: ‘I was sorry to be leaving Glasgow and shall always remember it fondly as giving me one of the happiest weeks of my life.’ It wasn’t my first appearance in the city. In the 1950s I’d played Count Dracula in rep at the Theatre Royal and a local critic claimed ‘Count Dracula no longer so fearsome. There were no gasps, no shrieks, last night’.  At ‘Joe Egg’ there were a few gasps but far more laughs, which was our intention. In this production by Michael Blakemore, still probably the best, its male lead was played by a comedian Joe Melia, a part  since done by other comics like Jim Dale and Eddie Izzard, and by actors Albert Finney, Richard Dreyfuss, Alan Bates, Clive Owen, Mark Benton and Christopher Eccleston. I always suggest to directors fresh to the work that they should think Noel Coward rather than Strindberg.  I’ve said the same to Phillip Breen [Ed. our Director for the 2011 production] so we have high hopes.

It’s marvellous to have it done again at its birthplace and we’ll be there at its rebirth.

Peter Nichols
(Writer - A Day in the Death of Joe Egg)

Photos from "Feeling You're Behind" by Peter Nichols.