On the Rim of the World - In rehearsal 1

When I started rehearsals for On the Rim of the World, my colleague Helen was really excited about the prospect of having a spy on the inside and I promised her faithfully that I would blog on a regular basis, charting our process. I have so far failed spectacularly… managing a grand total of one post since October.

So, this post will endeavour to catch you all up on the progress made since our rehearsals began in earnest. I last blogged about my experience in the auditions - we have (thankfully) come a long way since then! We’re now a fifty strong cast, working with an absolutely cracking creative team – from Neil and Elly tackling the staging and dramatic side of things along with choreographer Lynda, through to the conductor Chris, Honour and Otti who put us through our paces vocally and Matt and Roger who accompany us – to name just a few. 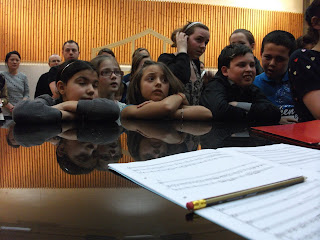 Rehearsals before Christmas saw lots of progress – in particular, we spent a whole weekend working out of Scottish Opera’s technical building at Edington St where we got to work with the set for the very first time! This made a huge difference to how we worked and meant a few changes to some of the staging that we had already blocked, but it really helped everyone get a sense of how it will finally look, as well as letting us get used to all of its different levels. It also has a few tricks up its sleeves – but I won’t spoil it for you. 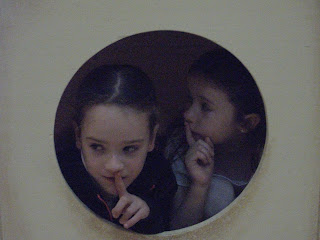 On the 8th January we resumed our rehearsals back at the Citz and for a while it seemed that the consumption of too many mince pies had erased all of the words, notes and movements from our memories. But we needn’t have worried; slowly it all started coming back to us and before we knew it, began to have something that felt like a show again.

That weekend also heralded the introduction of props – bedsheets, plump soft pillows and cuddly toys all proved popular with the kids, while the adults were introduced to their ‘babies’. The babies resemble small rugby balls, stuffed with the same material you would use to fill a bean bag. The daddies were the first to acquaint themselves with their new offspring and prompted more than a few giggles from the ladies – one inexperienced man looked as though he was hoaking a sack of tatties, whilst another was seen drop-kicking the ‘child’ to the far end of the rehearsal room. We’re lining up some child-rearing classes alongside the vocal warm-ups…! 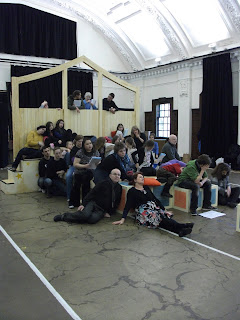 Our mid-week rehearsals last Tuesday and Wednesday heralded two exciting developments – the orchestra joined us for the first time and we were privileged to have a visit from Orlando Gough, the composer (no pressure folks!).

As we arrived in the rehearsal room the orchestra, Scottish Opera’s Connect Orchestra were already in full flow and sounded incredible. It was hard to believe that they had only rehearsed together for the first time two days before. The orchestration is truly lovely and suddenly made sense of some of the harmonies that had felt a bit jarring beforehand – but it is a very challenging score and cues that had seemed quite obvious in the piano score were harder to hear and we missed a few entrances before getting into the swing of things.

Mr Gough himself was a delight; we had been slightly nervous about what he might make of our interpretation of his score - would he be horrified by our harmonies (or lack thereof), aghast at our acting? Thankfully not. Orlando proved to be a very supportive addition to our rehearsal on both occasions - not just sitting in a corner and watching but actively participating in our warm ups, mingling amongst us, offering advice and even helping us keep time in the tricky parts. 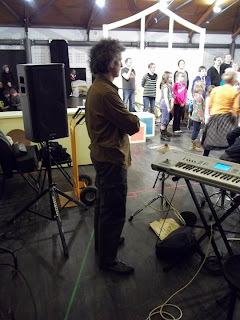 The Man himself, Orlando Gough.
I for one felt it was an incredible privilege to get pointers and tips from the very man who composed the music and I know everyone else felt the same. We found out later from Elly and Neil that feedback from the man himself had been very encouraging, so at least it seems that we’re on the right track. Phew!

I’ll try to post more regularly from here on in… honest! Cx
Labels: Double Bill of Family Opera On the Rim of the World Orlando Gough Scottish Opera

Bluedog said…
A brilliant and hugely fun evening in the theatre. That's a massive amount of work to get these operas so perfect.