Less than a week before our Festival 2009 show opened at the Assembly Rooms, our lead actress had to step down due to family illness. Her brave replacement, Michele Gallagher blogged for the Scotsman, this weekend, about the whirlwind journey that brought her to The Sound of My Voice:

“August 2009, I had planned to paint my spare room, sort out my taxes, catch up with friends and maybe cycle around Millport (I've always wanted to do that!). Performing in the Citizens Theatre's production of 'The Sound of My Voice' at The Assembly Rooms as part of this years Edinburgh Fringe was not on my agenda. Yet here I am!

On the 31st of July, my painting plans where shelved when my agent called, 'What time can you be at The Citz?' 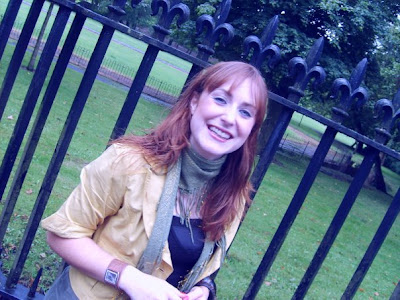 'Eh, can you give me an hour?.' By 1 o'clock, I'm with Jeremy Raison, the director, reading from his adaptation of Ron Butlin's brilliant novel. By 2 o'clock Jeremy had offered me the part, by 3 I was handed a script, introduced to my other cast member, the wonderful Billy Mack, and the countdown began.

'The Sound of My Voice' had a very successful run last year at The Citizens Theatre. Unfortunately, the original actress had to leave the production, but in true showbiz style, 'the show must go on' and so did I.

The rehearsal process was....quick! Usually, you have three weeks to get to know your fellow cast members, create characters and learn lines. All the while the nerves and excitement build as you approach opening night. I had 5 days, there was no time for nerves.

The piece is based on an alcoholic business executive played by Billy and the complex and strained relationships he has with the people in his life. These characters, all of which I play, range from an innocent 5 year old girl to a 'gallus' 45 year old business man with many more popping up along the way.
For the few days leading up to the Fringe, I lived and breathed the script. Tearing my eyes away only to eat or sleep. My poor boyfriend patiently read each scene with me over and over again, until the characters began to find their voice and the words were committed to memory.

Now, one week into our run and those first frantic days seem like a distant memory. I am finally performing in a Citizens Theatre production, (something I have longed to do since my ushering days there, while at drama school) in an amazing play, which is part of one of the biggest and best festivals in the world and I am having the time of my life. The spare room can wait!