Skip to main content
Labels
Posted by Cat McNaught May 21, 2009

'Jeremy Raison's production of Ghosts for the Citizens Theatre... treats the play not as a sombre slide into tragedy but as a fierce comic satire against the prudery, misogyny and hyposcrisy of provincial Norwegian life. 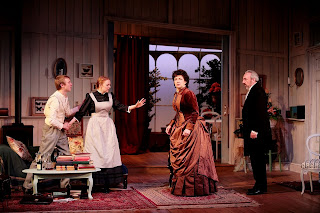 'Raison's irreverant approach to the play... generates a fierce and questioning energy, not least through Maureen Beattie's towering performance as Mrs Alving, a woman still bursting with inconvenient sensual life and intellectual restlessness. Jason Southgate's set... beautifully lit by Charles Balfour to conjure up fierce Nordic alrterations between radiant sunlight and rain-drenched gloom; Elspeth Brodie and Steven Roertson light up the stage, as the young people so closely bound together.'