A gang fight in the staff car park which draws the attentions of the Procurator Fiscal's office, a increasingly meticulous joyride, a beating with mops and a heavy bible, trousers too tight to bend, a radio broadcast in which we find that the word 'bastard' is not allowed on the BBC and have to adapt our script accordingly! - just some of the delights of this weeks rehearsals. Not to mention the demolition of Norfolk Court opposite the theatre which was spectacular - a new landscape faces us. We're beginning to hunger to get into the theatre but there's more work to be done and we must wait... 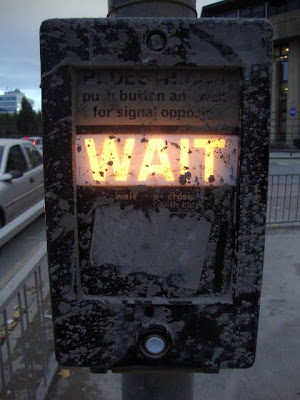 This is the last week of rehearsals before we head to the stage. Everything must come together NOW. I can feel the pressure in the rehearsal room: the actors are more nervous, wanting definite choices to be made. Directors tend to want to keep changing things until the last minute, actors tend to like to be able to solidify what they're doing since so much of acting is about confidence. Clarity is the key to the week.

We have to tighten up the movement sequences. Simple drilling is the order of the day. If the movement isn't sharp it will be immediately obvious. We also start building our soundscape, with visits from our sound designer, looking at specific timed sequences. The sound aesthetic will be complex and bold early on, gradually being stripped back as the play goes on, all the time mirroring Alex's experience. Once it's in place it will give a great depth to the play, but at the moment most of the sound is in the heads of myself and Graham Sutherland, the sound designer. The actors and I make sound effects in rehearsal at key moments to mark what will happen - sirens, cars starting, doorbells, music beats. But gradually during the week these are being replaced by the real sounds that we will hear on stage. 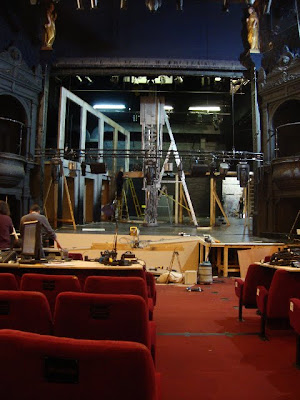 The set is also going up in the theatre. Lights are hung, based on what the lighting designer, Charles Balfour, has seen of the work so far (and of course this may change over the coming week). Every lantern must be individually hung, focused to a particular area of the stage and coloured with gel. It's always a very time consuming business and involves using a special ladder called a tallescope on the sloping raked stage. At the top of the tallescope, the ladder always sways....

The set is beginning to go up. This will be one of the hardest things next week - adjusting to this new stage of ramps, and upper levels and tricky staircases and wire mesh flooring. It will change the timing on sequences which we have essentially been miming up to now. One actor is also not fond of heights, and the upper level feels very high to actors on stage. It is at the same level as the dress circle. I always feel very privileged to be able to walk round the theatre and see the set being build, costumes made and props appearing. It's invaluable in rehearsal to see these things early as one can pre-empt problems but it is rare now for theatres to have their own workshops. The actors also take sneak previews which is very useful as it starts to clarify for them what they will actually be working on, and they can think about any issues that will arise later. The auditorium itself looks like a bomb-site.

We are looking a lot now at character and refining scenes. Some just feel wrong, or still under-developed, particularly after changes made last week. Every actor wants rehearsal time and it's surprising how quickly time is eaten up. Some things we're touching for the first time such as a dressing and undressing sequence. This can only be done with costume and with the right music, which has to be designed as no single piece of classical music does what we need. 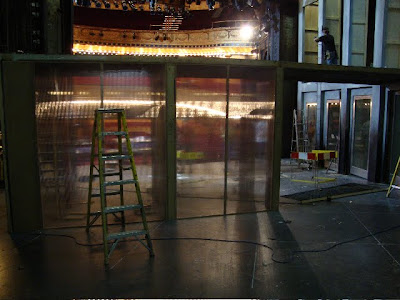 The creative team pop in and out of rehearsals as much as possible to keep abreast of any changes. Laura Walshe, our stage manager in rehearsal, types up meticulous notes every night after rehearsals detailing what we need and any changes. These notes are emailed to every department. Louise Brown from Citizens Learning and TAG also comes in with a mountain of paperwork which will become the online education pack, having interviewed a number of us also. There's a comprehensive look at the play, novel and the ideas behind them, mainly for schools, which will be complemented by this blog. Actors biographies must be checked for the programme. I write a director's note for the programme as well, mindful that critics tend to latch on to what is written. They're always keen for a context and contemporary relevance. We do some live sound recording including our 'riot' in the car park which is for the soundtrack. The ensemble are taken through everything they will be doing in the show for the first time and are incredibly disciplined and professional. We have interviews to do over the phone. It's a week of high activity.

Onstage activity continues. The floor's been painted, doors have been hung, and the set is beginning to look wonderful. Lights are being added all over the set, giving it a futuristic look and a really unusual quality. Designer Jason Southgate has started adding bits of details which is one of my favourite part of the process - seeing a basic shell becoming a finished design. 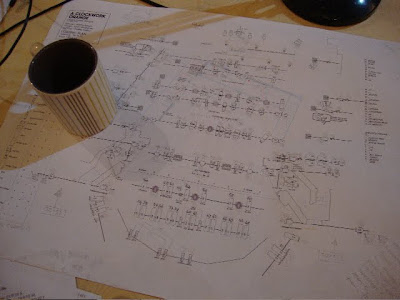 We run the first section and it works surprisingly well - sequences are faster, tighter, with more dynamism. Now we must get the rest of the play to this level. I can begin to see the shape of the overall piece and what still needs to be done. Ideally by the end of this week we will have a very robust piece which can survive the technical week. Brilliant productions can fall apart when they get to the stage as the space is so different and lights and sound can overwhelm a production. You spend four weeks rehearsing and then two days putting it onto the stage unless you are very lucky and have more time. It's very fast and calls for extremely rapid decisions at an exhausting part of the process when people are very tired. As a director you then have to live with those decisions. So the more pre-planning the better - the stage manager and I spend an evening going through all the lighting, sound and video cues in the show. Many more will be added later once we're in the theatre, but it's a start.

And by now all of us can't wait to get onto the stage and play a bit. The set is like a giant playground and we want to do it justice. It needs to feel an integral part of all we've done so far. And of course one of the actors has to jump off the top level and so we're working with someone who can teach us how to do this safely. 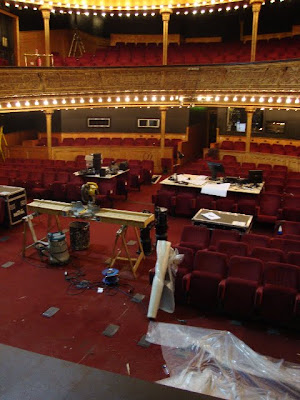 Some directors build shows almost matchstick by matchstick, meticulously, with the whole play pre-planned and everything gradually glued together. I tend to work more like a sculptor, starting with a mass and gradually whittling away to find the form within - coming at it from all angles, finding some more polished and complete than others, taking off large chunks or smaller depending on what is needed. I like to get actors on their feet almost from the very beginning. Others like to sit around a table and discuss the play for a long time. There is no correct method. The proof is in the production that is made and how audiences respond to it. It's an exciting time, and on Saturday (this morning as I write this) we will be on the set for the first time, and will also be lighting the show, so it is ready for the actors to begin the technical rehearsal on Monday...