Well, dear reader, it is now Tuesday, and here we are at the start of another glorious week in Betrayal land [Ed. apologies for the later posting...I have made up for it with a few new pics by Richard Campbell]. It’s been a fantastic run so far, and the audiences have been both sizeable and very appreciative. The various critics have also been very generous in their praise, which is lovely for all.

”It is, in both aesthetic and technical terms, truly exquisite.”
The Telegraph ★★★★★ 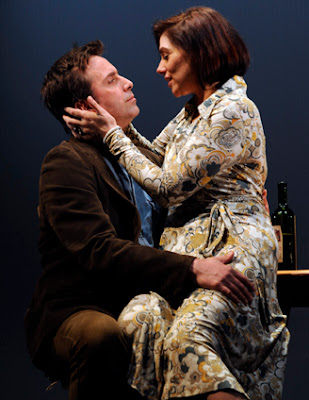 “as immaculate as it is thought-provoking, and often downright beautiful. ”
The Scotsman ★★★★

Fraser has effortlessly and seamlessly slipped in to his ASM role, and is making a splendid job of operating the sliders and all manner of other proppy/furniturey things. Emma took over the calling of the show from prompt corner on Saturday night, and made a similarly splendid job of it too-what a team! 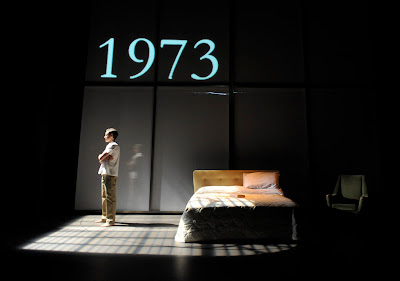 Other than that, there’s not much else to report. We have not as yet managed to better our Keepie Uppie count of 307, but who’s to say what lies ahead-you will be the first to know, rest assured.

The theatre is now bung-full of all types theatrical, as King Lear went into rehearsal yesterday, and we also have the touring production of the Scottish Play (The Steamie) rehearsing here, as are Theatre Crytic and Oran Mor’s Play/Pie/Pint 2 shows in the building too - it’s a veritable factory of art here, let me tell you! 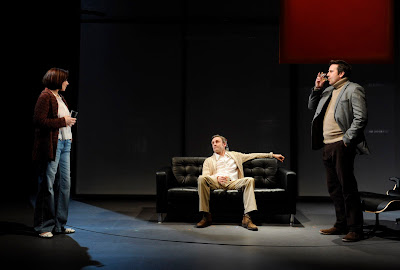 In fact, talking of King Lear, Neve and I took it upon ourselves to join some of the cast after their first day yesterday for a small sherry or three in the fine establishment that is Sharkey’s Bar out the back. We thought a little inter-cast cross pollination might be the very thing, just to welcome them, you know. We are all heart, generous to a fault……