Assistant Director George Nichols shares all the latest news from the Long Day's Journey Into Night rehearsal room. In week two they're exploring the historical context of the play.


Long Day’s Journey Into Night takes place over one day in the life of the Tyrone family. This week we’ve concentrated on the second half of the play, which takes place in the late afternoon as it turns into night. As we discover more about the lives of the family we’ve had to learn more about the world of the play too, so this week’s blog looks at some of the research we’ve had to do.

An important but challenging aspect of the play that comes to the fore as we move to the latter scenes is the effect alcohol has on the characters. Attitudes to drinking in 1911 were very different to today and many families in America drank hard liquor habitually. At this time whisky was a common drink to have with your lunch and in the decade before prohibition in the 1920s America was consuming more alcohol per head than ever before. In the early 20th century the US was a melting pot of different nationalities and the drinking traditions of these countries, paired with the perception that alcohol was safer than dirty water, contributed to a heavy drinking culture.

Understanding this culture has been important for the actors because of its effect on the physical and mental capabilities of the characters as they become more inebriated. One of the challenges is understanding how much alcohol it takes to really affect the characters in the play, when the regularity with which the characters drank meant they were much better at holding their liquor than the average person from the 21st century. Another challenge is keeping track of how much a character has drunk to ensure their characteristics do not become inconsistent.

We want the world of the play to feel as real as possible and we’ve used lots of research to inform this, for example: tobacco culture. While some people smoked cigarettes in this period the main way people consumed tobacco was either by sniffing it (snuff) or by smoking a pipe. We’ve also had to look at the literature referenced in the play and the lives and poems of writers like Baudelaire, Swinburne, Wilde and Kipling. This extra reading means we can better appreciate the significance this work would have for the characters in the play. 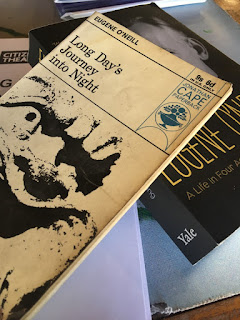 Research is just one strand of our work that informs the staging of the play but it’s really important in understanding why characters act the way they do. It also means that as much as possible our decisions about the play are based in fact and not supposition.