The heart of Scotland's impressive shipbuilding industry was located on the Clyde. It was also a centre of asbestos production and the widespread use of this toxic substance has had a lasting impact on the area and its local communities. Frances Poet's play Fibres is a moving tribute to those affected by this tragic legacy.

When Fibres toured to venues and community halls last year, we were overwhelmed at how many people took the time to share their own stories and experiences with us. Now, we've made a film of the show so that more people across the UK can learn about this hidden history. (If you haven't already, you can book your Watch At Home ticket at fibresfilm.co.uk.)

In this blog, we're looking back at some of the wonderful feedback and heartfelt memories that we received in response to the tour: 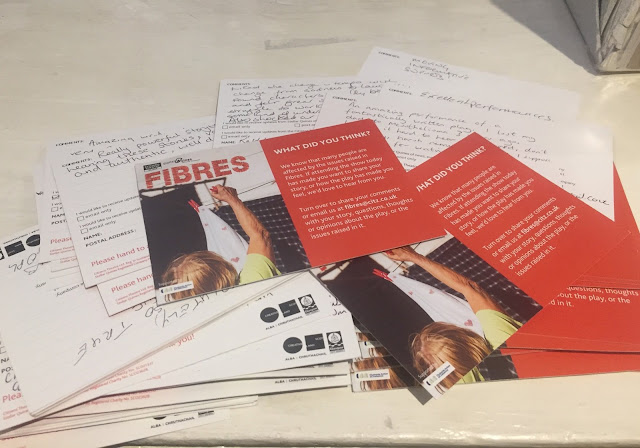 I wanted to write to tell you how fabulous the play was. I lost my grandad in November 2017 to mesothelioma. He was diagnosed only in the July... One part of the performance that stood out for me was the part where Lucy is dreaming and talking to her parents about the financial claim. Recently our family have gone through this claim process and received some money. It was the strangest feeling receiving a cheque. Because nothing will ever replace my grandad, no amount of money in the world will heal my broken heart. But that money has also helped me with a mortgage. Listening to the parents telling Lucy to think of a figure and double it made me think of my grandad and I hope he would be saying the same. I hope he knows that we would rather have him here. For the last few months I’ve really struggled with thoughts of him thinking we are greedy, but watching the play made me think of it from another perspective. So thank you. I feel at peace with it now.
Audience member, Fibres Tour 2019

Saw #Fibres last night. @FrancesPoet's script is a beautiful catharsis that one minute has you roaring laughing and the next ripping tears from your eyes. A brilliant cast with @jemimalevick at the helm bring the script to life. So much I want to say but just go see it! 🌨😂❄😭 https://t.co/3BQR6pXhej

The play was really heartwarming and hit home with a few memories of my own family member who struggled with asbestosis. The actors/actresses were on top form and really showed how family illness can affect everyone in different ways. Thank you for a wonderful show xx

Just loved #fibres by the incredible @FrancesPoet at @PaisleyArts last night. Beautiful, painful, funny, reletable and heartbreaking. Fantastic direction and wonderful performances from the cast. Thank you all for telling this story. Go see! @Stellarquines @citizenstheatre

As a local GP I have supported patients and their families for over 20 years in dealing with asbestos related illness and watched patients going through diagnosis to end of life care. This play was a moving and very accurate representation of the struggles people go through.

Thoroughly enjoyed it. Love theatre based on true stories. Great to see a sad story told with humour and this hidden issue being brought to the attention of the public.

I saw the show in Paisley and thought it was extremely powerful. I lost my dad in September 2016. He is still in many family conversations which for me keeps his memory and personality alive. What I found hard to hear was the word Mesothelioma. I’m not sure why, maybe it makes it feel too real. For me though, the most amazing fact is that the writer of the play (as far as I know) did not lose anyone to this horrible disease but was able to articulate so well what victims and families are going through. I thanked Frances Poet after the show and she was so grateful and thanked me, it was really touching. Well done to all involved.

The film of Fibres will premiere online on 25 November 2020. Watch along with us, wherever you are, as we relive this important and entertaining story.

A co-production with Stellar Quines, the film of Fibres is made possible thanks to funding from the Performing Arts Venue Relief Fund and is supported by Action on Asbestos and Thompsons Solicitors.