Faithful Ruslan: The Diary of an Assistant Director - week one

Rehearsals are now underway for our exciting co-production of Faithful Ruslan: The Story of a Guard Dog, a new adaptation of the cult Russian novel by Georgi Vladimov. Assistant Director George Nichols will be sharing his experience of bringing this story to life on stage over the coming weeks. 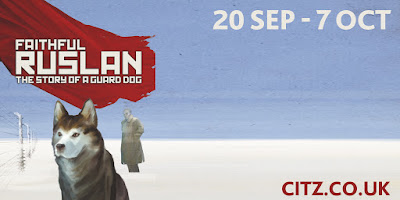 The first week of a rehearsal is like standing on a cliff at the edge of the ocean; your feet tingle with anticipation as you long to jump into the great expense of mysterious water that is the play. This has certainly been the case with Faithful Ruslan: The Story of a Guard Dog, as the strange and enticing world of Josef Stalin’s Siberian prisons, also known as ‘gulags’, was waiting to be explored and excavated. Georgi Vladimov’s compelling dissident novel illuminates the reality of a life lived in service of a system through the eyes of a dog, and Helena Kaut-Howson’s exciting adaptation requires a unique process the melds the strands of textual work, movement and research to create a physical language that demonstrates the social and political context of the play. Our days have been split accordingly, with a large amount of time devoted to both movement and textual work. 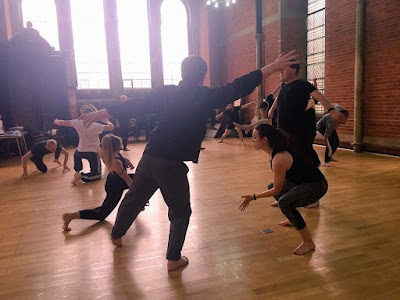 The text relies on a strong chorus, and thus the movement director Marcello Magni has spent a lot of time with the cast working on techniques to help them become an ensemble that are able to think and act as one. This has involved exercises inspired by Jacques Lecoq’s chorus techniques; such as adding multiple instructions to collective tasks so the cast may become sensitive and responsive to each other’s actions. All of the cast must quickly change between prisoners, guards and dogs and so time has been spent working on quick physical transformation, and needless to say, there has been lots of running around on all fours!

Our initial text work has been focused on making the words of a novel immediate and playable and Helena has also been trying to get people out of their own world’s and sensibilities in order to unlock the complexities of Ruslan’s fanatical devotion to the service. We have also looked at a good deal of research, focusing on a broad range of recorded experiences from those who came into contact with the gulag system. Helena has felt it important that in order to portray the complexities and realities of this world we look at sources that also talk about the positive moments people had in the camps; there was sometimes camaraderie, faith and moments of justice. As well as research into the system, we have also looked at videos that detail the relationship between dogs and their handlers, in order to understand the closeness of their bonds and also how dependent we are on our canine friends.

We now look forward to getting more of the piece on its feet, and pushing off toward deeper waters, where our feet no longer touch the ground…

Stay tuned for more updates from George over the coming weeks!